Continuity of Air/Water Barriers at Glazing Assemblies: Where it goes wrong in New Zealand 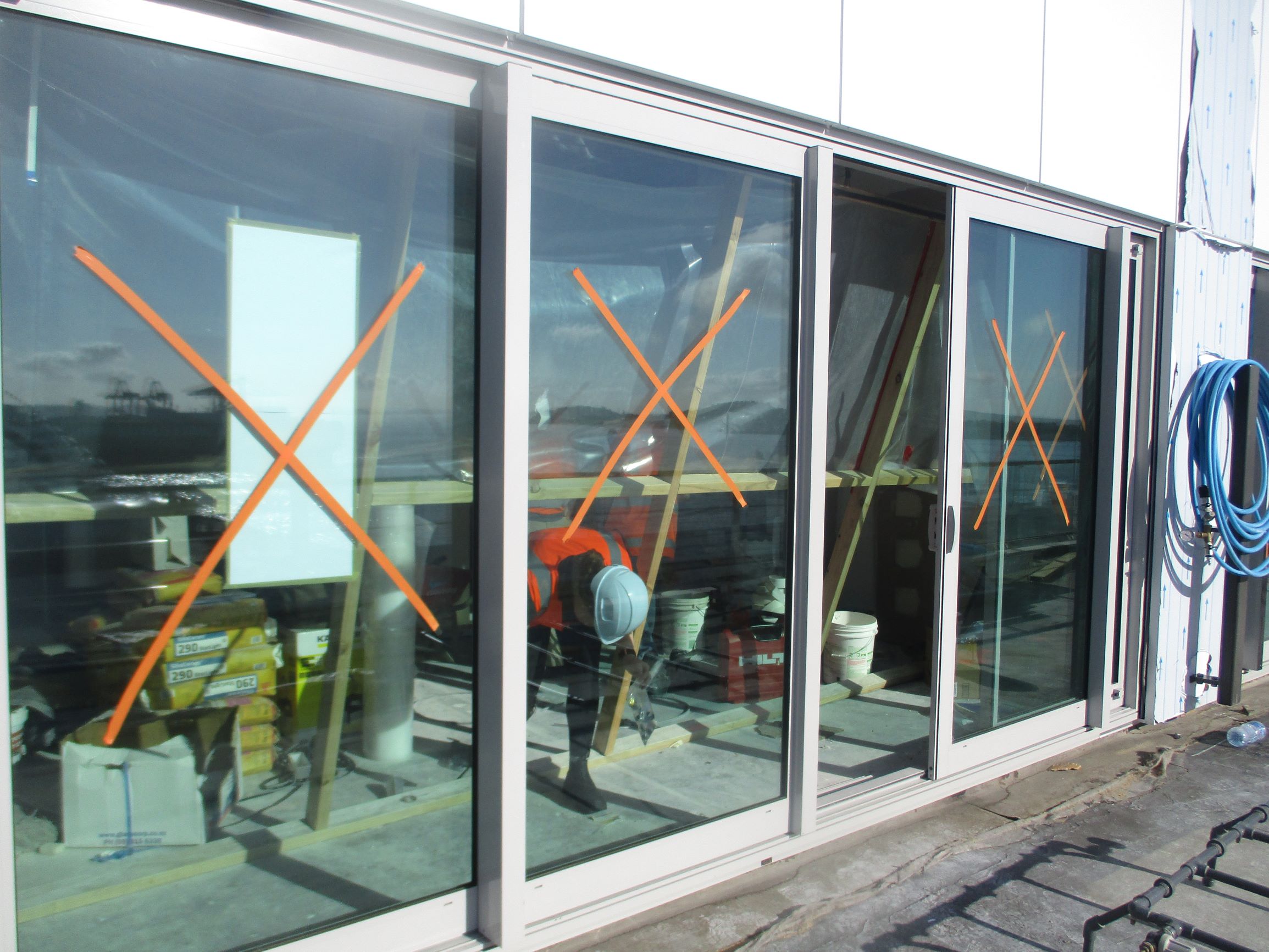 Continuity of Air/Water Barriers at Glazing Assemblies: Where it goes wrong in New Zealand

The key to maintaining a weathertight building is continuity of the air, water, and (sometimes) vapour barrier. Barriers can take many different forms, including impermeable wall underlays, flashing membranes, sealants, or exposed architectural components (e.g. metal and glass). While the barriers differ from system to system, the concept remains the same; the primary water barrier (not air barrier) is the most important line of defence and delineates a “dry zone” from a “wet zone” (i.e. what elements can be wet, and what elements must stay dry); it is also the component most essential to compliance with NZBC Clause E2.

There should never be a break in the primary air or water barriers of a building envelope. Breaks, voids, and discontinuities will increase the risk of leaks through the building facade and leave the building with failing or non-complaint assemblies.  Proper detailing at transitions, penetrations, and joints through the primary barriers will protect these vulnerable areas from failure. As a designer, the key to proper detailing is tracking your barriers throughout the building envelope as you move from system to system.

Glazing assemblies undergo rigorous design, testing, and quality assurance to verify air- and water-tight parameters are met. Metal and glass are impermeable, and the joinery consists of gaskets, seals, and weeps to prevent or manage air and water intrusion. Similarly, air and water membranes are inherently resistant to air and liquid water. So, what is protecting the transition between the two established weathertight facade elements? The typical answer: formed perimeter sealant joints.

Perimeter sealant joints are located between the frame of the glazing assembly and the adjacent rough opening (typically lined with an underlay and/or flashing). Most international design practices separate the air and water joints into two distinct locations; with the innermost joint serving as the interior air barrier and the outermost joint acting as the primary exterior water barrier (Figure 1).

The typical New Zealand glazing design, conveniently depicted in E2/AS1, includes a continuous inner air-seal but no distinct exterior weather seal from the window frame to the primary water barrier, i.e. wall underlay (Figure 2).  Instead, a bulk water seal is included between the joinery and cladding.  Installed in accordance with E2/AS1, the continuous primary water barrier (where you must assume water is present) now tracks from the wall underlay back to the inner air-seal. This detail methodology can still provide a compliant glazing assembly, and continuous water barrier; however, in order to do so, the entirety of the window joinery must be continuous and watertight.  This is not typically the case in most New Zealand glazing assemblies where the interior trim is not part of the continuous window joinery. Even in the E2/AS1 details below, exposed joints between the metal frame and the internal timber lining of the window can allow water ingress (blue arrow) that bypasses the water barrier at the inner air seal.  Hence, continuity is not maintained, and in theory the detail fails to meet the base requirements of E2. 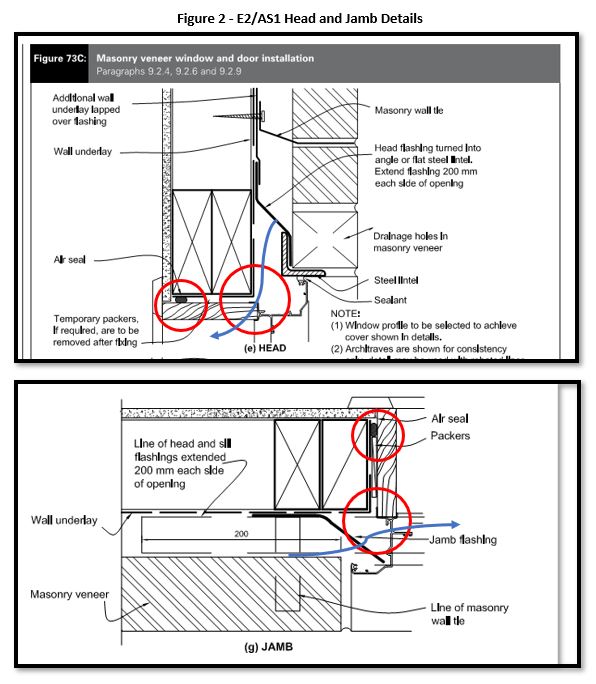 Having established inherent concerns with the E2/AS1 window details, let’s look at the next misunderstood concept of barrier continuity: laboratory water testing.  The primary standard for performance testing and validation of windows in New Zealand is NZS 4211 – Specification for Performance of Windows.  This specification allows a manufacturer to test and certify their glazing assemblies to a specific design pressure, or wind zone.  The results of the laboratory test allow a designer to have a level of confidence that the selected glazing assembly will meet their project’s design criteria for water penetration resistance.  An important note in the NZS 4211 foreword states that “This Standard…does not provide a test for the weathertightness of the installation details at the window perimeter or the interface between the window and surrounding facade elements in an external wall.”

If the results of the NZS 4211 test cannot be used to validate the perimeter air or water seals outside of the glazing assembly, an alternate means of validation must be used.  Rather than spend time and money on more expensive testing protocols, many designers turn to the manufacturers’ details for guidance in addition to E2/AS1. Figure 3 is a project-specific shop drawing from a New Zealand glazing manufacturer. Similar to E2/AS1, there is a continuous air seal on the interior, but no water seal from the impermeable portion of the window frame to the adjacent wall underlay. 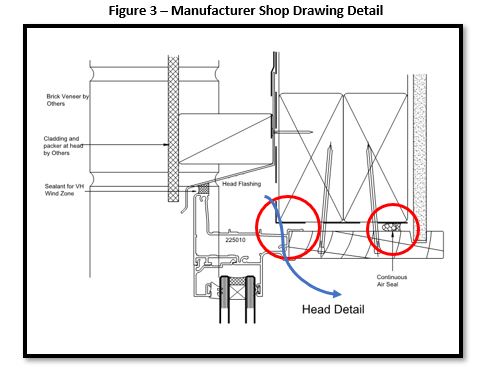 The glazing manufacturer may state this installation has been tested and passed laboratory water testing and is therefore a compliant detail.  However, this is often not the installation that was tested in the lab.  Figure 4 is the detail from the NZS 4211 laboratory test report of a typical New Zealand window assembly. The key feature in the lab shop drawing is the external seal located between the window frame and the adjacent substrate (the test chamber). Although this seal is technically outside of the scope of the test, this seal is serving the purpose of providing a continuous water barrier and preventing water intrusion through the perimeter of the assembly. 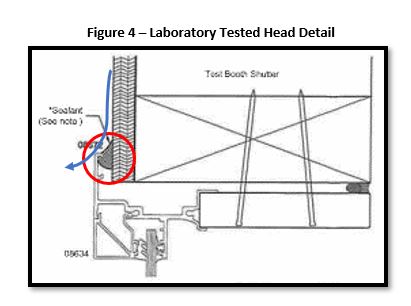 Without this external seal, the perimeter of the window assembly would likely not have passed the lab test. Removing the seal, as shown in the Figure 3 project detail, is implementing a design detail that differs from the tested and successfully passed lab condition. This discrepancy is commonly missed by NZ glazing manufacturers, installers, and designers, and can lead to future weathertight performance issues.

Understanding this disconnect between the design of the tested window assembly and the final project detail is the first step in rethinking how we detail window assemblies in New Zealand, above and beyond the bare minimum requirements set forth in E2/AS1. The next step is understanding the concept and importance of barriers and providing a continuous primary water seal from the weathertight window frame to the facade’s water barrier.  Using this type of information to make an informed design decision is the only way for New Zealand to push beyond industry norms and deliver truly weathertight buildings.